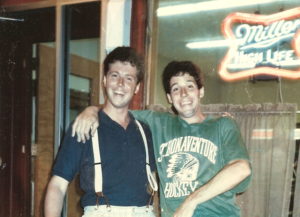 By Phil Gianficaro • The Intelligencer

The sadness hits like a bomb. It arrives screaming from nowhere and explodes in his soul.

Sometimes, it’s triggered while he’s driving and a song plays on the radio that his big brother Joel used to love. Other times, sadness envelops him for no reason except that, well, he just misses him terribly. A lump forms in his throat, and he loses a fight against tears.

But each time the bomb drops, Johnathan Gingras imagines his big brother’s reassuring voice telling him, “Suck it up! I’m doing just fine up here.”

The Gingrases are doing just fine down here for their brother and son up there, who died from a malignant brain tumor in 1988 at age 27. They feed off his spirit. They honor his memory with the Joel A. Gingras Jr. Memorial Foundation, or the JAG Fund, that since its founding in 1989 has raised research funding by organizing fun-filled tube floats on the Delaware River, golf outings, black-tie galas and more to help eradicate the disease that stole him from them so many years ago. Total money raised? More than $1.5 million to benefit the American Brain Tumor Association’s research and awareness program.